Running Injuries: When is it Time for Physical Therapy? 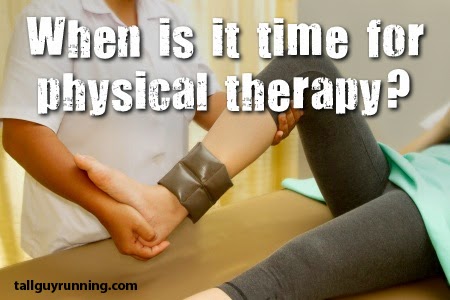 After 6 months of inactivity (i.e., not running) I finally caved and called a physical therapist.

I definitely hit a rut after backing out of the marathon last January. My knee pain wasn't going away and my motivation fizzled out. I still sought the help of various massage therapists, started a regimen of strength training and continued stretching, but gradually less so as the weeks went by. For a couple months in our rainy Oregon winter I wasn't very active at all.

As spring rolled around, however, I saw the potential future of a summer without running and my injury once again became a priority. Physical therapy was my last resort, and I held it off for one reason: price.

I'm not getting rich from my job and my catastrophic health insurance doesn't cover very much, so I tried all the cheaper solutions first. Now I was out of inexpensive ideas, my pain still persisted after several months of rest and I realized I was willing to pay a lot to get moving again.

So how do you know it's time for physical therapy?


Here are some tips I found online for deciding when it's time to call a PT:


Those are all well and good, particularly because they err on the side of caution, but if finances are an issue and the injury doesn't seem very serious then I don't see any reason to hold off and try alternative remedies first. For example, the professional diagnosis for my ankle injury a couple years ago came from the most experienced podiatrist in town. She told me I needed to replace my minimalist shoes with thickly-cushioned shoes, wear a $500 orthotic boot for a few weeks and possibly get an MRI and start physical therapy. I decided to get a second opinion from a chiropractor. After looking at my ankle for a few minutes he gave me a simple alignment and my pain disappeared forever (all for less than $100). He also encouraged me to stick with the minimalist shoes.

I don't mean to seem anti-physical therapy. I've known a few physical therapists who were experts in their field, including both the instructor of my minimalist running workshop last spring and my current physical therapist. I just think it's worth exploring other, simpler options, and hopefully you won't blame me for this after the experience described above.

All said and done, the quick fixes weren't coming through for me this time and I started worrying that something more serious was going on in my leg. I've had several appointments with my PT now, who came highly recommended from a friend. The appointments usually involve running on a treadmill for a few minutes until the pain flares up, followed by various other exercises to zero-in on the muscles that are causing it and seeing if there is any improvement. Then he massages the crap out of those muscles until my whole knee is bruised. He also gives me home stretching, strengthening and massaging exercises to do every day.

The result: after a few weeks, my knee pain is finally going away! Sometimes I can't even feel it at all.

He believes I did some damage to my lower hamstrings on my epic 16-mile run when I tweaked my gait to avoid the other pain on the lateral side of my knee. Now that damage seems to have healed (because I took a few weeks of rest), but the muscles hurt because they are all knotty and tight and need to relearn how to work properly. That's good news, along with the fact that he thinks it's nothing more than soft tissue damage that can be healed easily without serious treatments, like orthotics or surgery.

He also said working the muscles and putting them into motion may be what they need. I just got the okay to start running! Only short distances with frequent walking breaks, but I just finished my first 15-minute run in six months and it felt incredible.

So yes, I begrudgingly admit I should have gone to see a physical therapist a long time ago, but I'm still grateful I know there may be simpler, less expensive alternatives for treating injuries.