Does the Vibram Lawsuit Change Anything? Not for Me 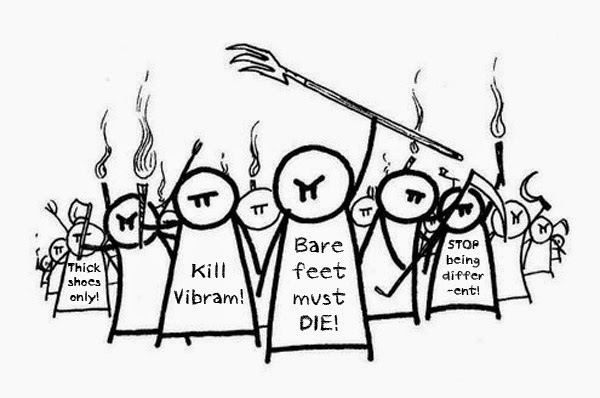 Here is a handful of actual headlines I read after the Vibram lawsuit settlement became public last month:

Doesn't sound good for minimalism, does it?

The class action lawsuit against Vibram came about because the company claimed their shoes would reduce foot injuries and strengthen feet when there was insufficient scientific evidence to support these claims. One little factoid that seems to be overlooked, however, is this: there is also not enough scientific evidence to say these claims are false.

Vibram wasn't sued because they made claims that weren't true. They were sued because they supposedly made a profit from claims that hadn't yet been proven or disproven. That's it. That's what all the negative headlines and articles and morning news shows are using to discount barefoot running as the biggest lie since Watergate.

As a bonafide shoe elf (i.e., I work at Soft Star Shoes—maker of minimalist footwear), I see and hear from people every day who tell me their foot pain disappeared completely after they transitioned to minimalist shoes or incorporated more barefoot walking and running into their lives. This includes myself, after overcoming plantar fasciitis by switching to Soft Star RunAmocs, as well as my own 70-year-old mother, who suffered from foot pain for decades until I gave her a pair of Soft Star Merry Janes for Christmas a couple years ago. Both of us wore thick orthotics for years to reduce walking pain, and now both of us walk pain-free without any cushioned support in our zero-drop kickers.

No, scientific studies have not yet shown beyond doubt the validity of Vibram's claims, but do you think I'm going back to the thick motion-controlled shoes I was wearing when my plantar fasciitis was growing worse every day? Am I going to tell mom she should throw out her now-vast Soft Star collection and return to the shoes that hurt her feet for decades? Should we climb up to the rooftops to scream "IT WAS ALL A LIE!" and start wearing orthotics and arch supports again?

No, I have no intention to change my footwear. I fully intend to continue running barefoot or in minimalist shoes because my experiences have led me to believe it's the healthiest choice for my feet and body.

The studies are still slowly rolling out, and although people seem very eager to attack minimalist shoes there hasn't been much for them to go on. One study was used by the media to denounced barefoot running on the discovery of a very small group of African tribal runners who landed with a heel strike at slow speeds (disregarding the fact that they switched to a mid-foot strike at higher speeds). Another very small study created a fury against barefooters by showing that switching to minimalist shoes may increase chances of stress fractures, although it didn't take into account the transition phase that so many barefoot runners and doctors caution about (for that matter, I'd bet money that the folks who threw the lawsuit against Vibram didn't know how to transition properly... a recipe for injury in any new athletic activity regardless of footwear or gear).

Believe it or not, I really am a nerd and a stickler for data. As a runner and shoe elf I'm always on the lookout for the latest research on this topic. Thus far, however, I've been largely disappointed with the multitude of attacks on barefoot running that claim to be "scientifically based," yet either exaggerate results, draw illogical conclusions or do not take into account obvious variables. Mind you, I mean no offense to the researchers who do the unbiased studies, just the ignorant offenders who read selective bits of data and write those headlines at the top of this post. A recent long-term study by Dr. Nick Campitelli showed an increase in arch height and strength in one of his patients after making the switch to minimalism. Why didn't these journalists and bloggers take that data and scream "IT"S TRUE! BAREFOOT IS GOOD!"

I'm not even a fan of Vibram FiveFingers—I don't like the rubber feel, the stuff between my toes, the way they make my feet look like a gorilla or the fact that they're made overseas—but I'm eternally grateful for what they've done to help bring minimalist running into the world. And I do love their soling materials (which, by the way, are made in the USA and used on both Soft Star RunAmocs and Luna Sandals). My fear now is that the media hype denouncing barefoot running is going to result in hype for thickly-padded motion control shoes, an increase in foot injuries and a lot of negativity when I tell people what I do for a living.

Alas, I still have hope. Maximalist shoes like those appalling Hokas may be on the rise now, but if they really are as unhealthy as I believe then it is only a matter of time until the pendulum swings back the other way. Research is still underway, and it's the long-term studies that take variables such as transition and strength training into account that I believe will come through for bare feet in the end. Fortunately, for my job security, Soft Star had a strong following long before Born to Run because there have always been and always will be a niche group of people who prefer to go barefoot and appreciate a simple handcrafted shoe regardless of what's in the news.

Incidentally, Dr. Ray McClanahan just came out with this video statement about the lawsuit. He's a leading podiatrist in his field, an elite minimalist runner, the inventor of Correct Toes and the instructor of the running workshop I took last spring. Plus, he's a hell of a guy:

There are many successful case studies of seeing improvement going minimal, but I don't seem to hear many happy stories of people turning to conventional shoes. For more info, here are some great resources of doctors and trained experts who have seen benefits of minimalist and barefoot shoes: