IT Band Pain (ITBS): Simple Exercises for Treatment and Recovery 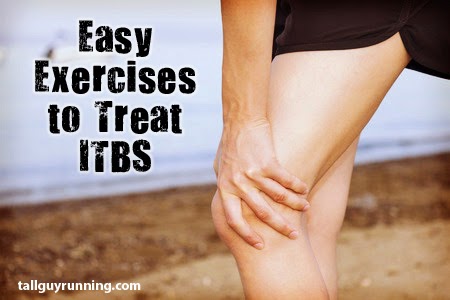 I know, I haven't written a new post in a while. The reason: I haven't been running.

Wouldn't you know it, after a long bout recovering from my hamstring injury, I began building up my mileage again only to find that my old lateral knee pain has returned. This is the pain that originally threatened my marathon last year and eventually led to my hamstring injury. To be clear, however, it was my dumb decision to run through the pain and change my gait on a long run that really led to the hamstring problem. In retrospect, taking some time off to rest and strength train would have been a much wiser alternative, and learning from my past mistake is why I'm not running now.

Last time I dealt with this pain, I was confronted with several different diagnoses by my chiropractor, GP and PT. Their combined theories included iliotibial band syndrome (ITBS) patellar tendonitis, patellofemoral pain syndrome (PFPS/runner's knee) soleus tendinitis and some weird thing with my tibial fibular head. Now, after a new diagnosis, I believe I've finally come full circle and narrowed it down to [drumroll]... ITBS!

My ITBS was hard to diagnose because the pain I felt was right on the tibial fibular head, much lower than most cases of iliotibial band pain. Feeling pain in this region opened up many other possibilities that my previous docs didn't want to rule out (it didn't help that I refused to stop training at the time, thereby not giving my body a chance to show improvement with any of my various treatments). I was recently fortunate enough to attend an event at a new physical therapy clinic that included free injury screenings for anyone interested. I jumped at the chance and had a thorough muscle-testing evaluation by a PT who was something of an expert on ITBS. He assured me it was the culprit. 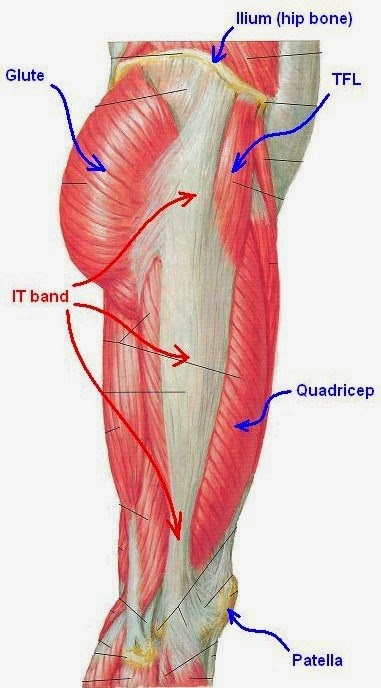 Okay, so I have ITBS. Now what?


I did a fair amount of research on ITBS last year, and after reading many articles and consulting PTs on the subject, here's what I know:


"Okay, tall guy," you're probably thinking, "that's all well and good, but what the heck do I do about it?"

Fortunately, I'm finding that curing ITBS is not difficult and I'm seeing a lot of progress in a short time, but recovery does require a little discipline. That means doing the exercises regularly and taking a break from running. Can't stand missing a workout? Try my solution of switching to an elliptical or other cross-training that you can do pain-free. This will also help with the recovery. In the meantime, here are the simple strength training exercises that I have found to help me get up and running again, but before you do them...

Don't make things worse by adding more stress to an inflamed muscle or tendon. Before anything else, cool the pain. Rest, ice, NSAIDs and topical anti-inflammatory creams are all good. So are turmeric and fish oil supplements, as well as a low-glycemic diet.

I know, I just said stretching and massaging your IT band won't cure it, but many PTs (including Mark Fadil, the Director of Sports Medicine Institute International in Palo Alto, CA) claim deep-tissue massage is necessary for strength training to be effective: every day for elites and two or three times per week for recreational runners. Use a foam roller or try massaging techniques like the ones shown below. I should add that there is some controversy about this: some docs believe stretching and massaging the IT band directly may not help and only lead to more injury. I suggest that if you try it, be gentle and take it easy. It may also be more effective to massage the TFL and glute muscles on either side of the upper IT band (see anatomical image above).

All cooled and massaged? Great! Let's move on to the Strength exercises.

Giving credit: while you can find these exercises all over the web, I pulled these images from the Runner's World website. I tweaked the descriptions based on my PT's tips. Hopefully they won't sue me.


This is my personal favorite exercise, and the one that I believe is helping me the most.

Lying on your side, slowly raise your top leg straight up with toes pointed down. Hold at the top for 5 seconds then gently lower. Form is very important. Check that you have a straight line from shoulder to ankle with the top hip slightly in front (it may help to do this with your back against a wall). You should feel the strain in your glute... the butt muscle of the leg being raised. If you don't feel it there, you may need to move your top hip forward more. Build up to three sets of 10 repetitions for each leg.


Again, start by lying on your side with your hips vertically aligned. Your thighs should be about 45 degrees from your body and your knees bent at 90 degrees. Place a resistance band around your thighs. Raise and lower your top leg only without moving your pelvis. Perform the exercise slowly with emphasis on good form. Build up to 10 repetitions of three sets on each leg.


Beginner Version: Balance on one foot, then bend your supporting knee to slowly lower your torso one-quarter of the way to the ground, then raise back up to the starting position. Your unsupported leg should be extended in front of you throughout the movement, not touching the ground. Take care that the knee stays straight over the foot and does not collapse inward. Build up to 10 repetitions of three sets on each leg.

Intermediate Version: After you have mastered the straight quarter squat, make the exercise more challenging by mimicking running form, extending the unsupported leg behind you and bringing it through to lift the knee in front of you. Ultimately, move farther by touching the ground in front of your body on the forward lean.

Advanced Version: While standing on your right foot, move a soccer ball up and down diagonally from lower left to upper right, then side to side in a twisting motion. Repeat with the left foot, moving the ball from lower right to upper left.


When strong enough, eccentric strengthening works the hip abductors in the same manner in which they function during running. Standing on one foot on a step or a stair, raise the other foot by lifting your hip on that side, while taking care to stay in a straight, upright position. Slowly lower the hip to the bottom of your range of motion, while staying upright. Perform 10 repetitions on each side and build up to three sets.

Here are some tips for preventing IT pain:

As an added bonus, I don't think a post on ITBS would be complete without mentioning Jason Fitzgerald. He's a runner who has recovered from ITBS himself and now devotes a blog to strength training for preventing and treating running injuries—appropriately titled Strength Running. I've enjoyed reading his blog and have found his tips very useful.

If you want more variety in your exercises, then check out his ITBS rehab routine below, or look on his blog for customized training plans.

That's about it. All said and done, I can do a decent IT band workout in less than 15 minutes. When I'm in a hurry, I just do one or two of the exercises above. When I have more time, however, I not only do all of them but other strength training exercises, as well. Working your glutes, hamstrings, quads, calves and core are all beneficial for running pain free, and living healthy in general, but that's a much bigger topic than I can cover in one post.

The result: I'm seeing progress! I take it easy and only run every now and then to test my recovery. In doing so, I'm finding the pain coming on later and later in my runs, and much less intense. I've been doing so well that I'm confident the pain will soon be non-existent.

I have to add a little disclaimer here: I'm no doctor and you shouldn't take anything I say to replace professional medical advice. Your ITBS or knee pain issues may be more serious than mine and may require different treatment, but I've found the techniques listed above to help me.