What NOT to Do When Recovering From a Running Injury 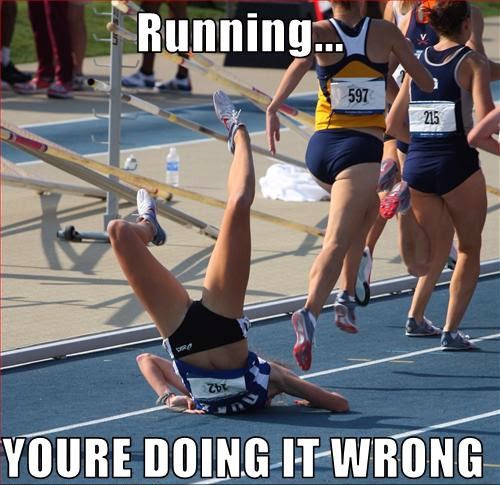 If only I had this much dignity.

I was starting to see improvement in my knee injury. Getting another opinion from another doctor made my diagnosis a mystery again, but what mattered to me was that I was able to resume running. A couple weeks ago I did 9 miles on the road with no pain whatsoever. My marathon goal was back on the horizon and I was excited. Perhaps too excited.

The next day, on a short 4-mile run with my running club, the pain returned at mile 3. I walked home, iced, massaged, stretched, took a rest day and told myself it was just a fluke.

Two days later I took on an ambitious 16-mile run. I knew it was a big jump after recovering from an injury, but I convinced myself I needed to do it to get back on track with marathon training. That was mistake #1.

Mistake #2 came when I felt the knee pain return at mile 2 and disregarded my previous resolution to STOP RUNNING WHENEVER I FELT THE PAIN TO AVOID FURTHER INJURY. Instead of throwing in the towel and heading to the gym to finish my workout on the painless elliptical, I let my frustration and wannabe-tough-guy attitude get the better of me and I became determined to find a way to run with what felt like a knife stuck in my leg. At all costs.

Mistake #3 was deciding that a change in gait might be the answer. Now I thoroughly believe that gait adjustments and improvements in running form are key to running injury-free, but in hindsight, a 16-mile run in agonizing pain is perhaps not the best time to start something new. And by "perhaps," I mean "most definitely."

After testing a few changes in my movement, I realized that lifting my knees higher into more of a sprinter's gait eased the knee pain considerably. The problem with sprinter's gaits: you can't do them for long, especially if you haven't been gradually training your muscles over time to strengthen and support the extra strain. You can count that as mistake #4. 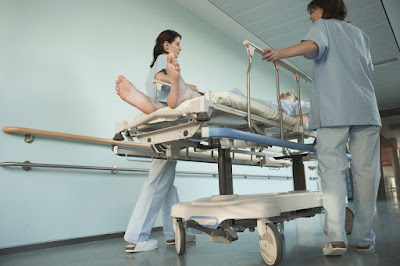 That should have been me in there, but I chose to keep running instead.

It didn't take long before I felt a new pain develop in my lower hamstring. I was already limping somewhere between miles 3-4. Going back to my gliding gait put me in knee pain. Lifting my knees higher eased the knee but hurt the hamstring. There was just no way around it—I couldn't take a step without pain that was now excruciating. There was absolutely no question that I made everything worse and needed to stop running immediately.

I will say I was proud of myself for finishing a long run despite pain. I felt pretty tough. Unfortunately, I could barely walk that night. Or the next day. Or the day after that. It wasn't my original knee pain that hurt, but this new pain in my hamstring was shooting through the back of my knee with every step. I kept telling myself that it was just natural soreness or a pulled muscle that would heal in a couple days, but I was wrong. This new injury has stopped me from running completely for over two weeks now, and it's much worse than the original knee pain that would only flare up after a couple miles on the road.

So here's the cost of being a tough guy and ignoring all the common-sense advice: a whole lot more doctor and physical therapy appointments that are costing me a fortune, no running at all and my Hawaiian marathon, now less than two weeks away, is looking like a pipe dream. 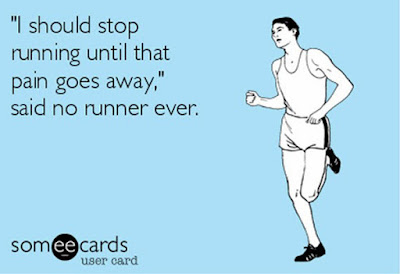 The good news is that with the forced break I'm finally starting to see improvement in my knee. I'm not limping anymore and I ran one mile on a treadmill yesterday for the first time since my day of complete foolishness. It hurt, but nothing like that long run from hell. And yes, I stopped when the pain set in and switched to the elliptical (which I can still do 100% pain-free).

What can I say: some lessons, no matter how obvious, are learned the hard way. Why did I keep pushing myself despite so many signs that I should just STOP? Like I said, frustration had a lot to do with it. I've been training a long time for this marathon and put a lot of money toward the trip. The thought of falling too far behind my training was horrifying. The hassle of dealing with the original knee pain added to that. I've seen so many expensive doctors over the past few weeks and put the rest of my life on hold to spend time researching, massaging and strength training, but the pain still persisted and threatened my goal. That was something I refused to accept. I was also a little angry with some things going on in my personal life, and running has always been the best therapy for any emotional difficulties I've had. I let that anger turn into improperly-channeled determination.

I'll be the first to admit I wasn't thinking clearly, but now that I'm learning to let go of the marathon goal I'm able to slow down and listen to my body better. I told myself for a long time that if I couldn't do the marathon I wouldn't go to Hawaii—I'd just push off the trip until I could do a marathon there, since that was the goal. Now I've decided to go anyway and have a nice vacation in a warm climate (unlike the rest of the country right now), and I'm starting to look forward to it. As a matter of fact, I've just realized that I had no idea what I was going to do during my week in Maui aside from the marathon. Surfing of course, but what else? Last night I picked up a Maui travel guide and I'm surprised myself that I didn't do that three months ago.

There will be other marathons, and if I want to run them then I need to heal first. Ripping my leg in half from determination won't help that goal.