Starting from Scratch: Why I'm Relearning to Run

4/14/2013
No Comment
Why do I say I'm relearning to run? The short answer: running is awesome and injuries suck.

I began running as a sophomore in high school. I hated running back then, but I was motivated by the idea of losing weight. People who know me now rarely believe it when I tell them I used to be a short chubby kid. Bullies at school used to call me Chunk because I bore a strong resemblance to the kid in Goonies.

The running worked. I lost weight and kids stopped making fun of me. The next year I grew a foot taller, but stayed the same weight. I went from short and fat to tall and skinny very quickly and didn't need to run for weight loss anymore. The thing is, running changed something in me. When I ran again after taking time off, I just felt great. Even with my chest burning from exhaustion, I remember thinking "Yeah, there's that feeling I've been missing."

That was about 20 years ago and I've been a casual fair-weather runner ever since, meaning that I tended to stick with 4-mile runs two or three times a week when the weather was nice. I never cared to run more or to enter races. Four miles was leisurely and fun, and I'm not by nature a competitive person. Only in the past year has it occurred to me that I could do more and might actually enjoy it. And as soon as I started entering races and running farther, I started getting hurt. 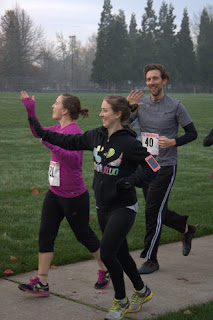 I'm now grateful for those injuries. They were minor, I was able to recover from them without much time or expense and they motivated me to research injury-free running. What I've discovered from this research has led me to conclude that I'm lucky I can still walk after running the way I ran for 20 years. I've been asking for serious injuries for a long time, and it's a miracle I haven't had them.

Like many casual runners I never really "learned" to run. I just put on my thickest, most supportive shoes and took off, slamming the ground as hard as I could and stretching my stride out as far as possible. Even when I converted my religion to barefoot shoes (which cured my plantar fasciitis) I thought that as long as I hit the ground with my forefoot first then all would be well in the world. It turns out there's more to running than just foot strike, and it took another injury for me to learn that.

So how am I relearning to run injury-free? Books, running blogs and workshops seem to have the answers, and I'm very fortunate to have good connections to all of these through my job at Soft Star. Suffice it to say, I'm making big changes to my running habits. Since I've been running the same way for most of my 35 years, change can be tough. I'm taking it slow and starting over from scratch with very short runs, as if I've never run before. This allows me to pay close attention to the many parts of my running form that I want to change. It also gives my muscles time to adapt slowly to the new ways I'm using them. And I'm running totally barefoot now, which I'm convinced this is the best way to adjust to injury-free running even if you plan to run in shoes.

You can expect many, many more details about all of this in the posts to come, but that's the gist of it.