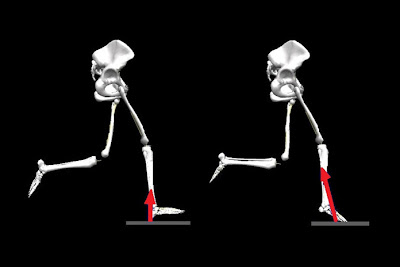 If you spend any time at all researching running form, you're sure to hear this idea stated over and over in many different ways: barefoot running is all about landing on your forefoot first.

Indeed, many websites, news videos and running books are quick to embrace the forefoot vs. heel strike issue as the key—and sometimes only—difference between running barefoot and running with shoes. If you spend any serious time researching healthy running form, however, it quickly becomes apparent that there is much more to consider than simply which part of your foot hits the ground first.

This was exactly the topic we covered this week at Minimalist Monday. Doc Sanatan and Doc Ray have encouraged us to land forefoot-first, followed by the heel coming down gently, but they also make this important point:

"Efficient natural gait has much more to do with where, in relation to the body, the foot contacts the ground than the exact piece of real-estate on the foot that touches it first, as well as HOW it connects with the earth."

This means that it isn't impossible to land heel-first and have a healthy running form, although it is important to land light, springy and all that other good stuff we've talked about. In fact, slow-motion analyses of some Minimalist Monday runners have shown a couple of them to run with a very gentle heel strike that works well as a natural gait.

We explored different running extremes at this week's class. Sanatan had us run back and forth across the park with a high cadence, a low cadence, springy knees, stiff knees and without letting our heels touch the ground (some of these, the more injury-inducing styles, we only did briefly). The purpose was to bring awareness to how these changes felt in our bodies, and to find the right balance of springiness, cadence and form that felt good for each of us individually. 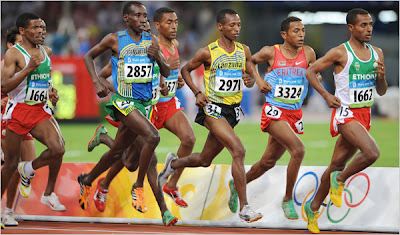 This is what it felt like to run across the park. I'm sure it didn't look so glamorous.

After a few dashes back and forth, Sanatan asked for a couple volunteers to have their gait recorded and analyzed for the class. I hesitated to raise my hand only because I didn't want to be selfish and deprive anyone else of what sounded like a great opportunity for a valuable free professional running analysis. To my surprise, everyone else turned out to be a little shy, so I jumped at the chance. One other guy followed my lead.

We took turns running while Sanatan recorded us with an iPad. When we were finished, we all gathered around a shaded area of the park to look at the results. There were a couple specific traits Sanatan was looking for, based on what we've learned in the workshops so far:
I'm very happy to say that my running form passed all of these tests. No comment on the other guy.

It's worth noting that Sanatan said he often treats injuries for these two common mistakes made by those transitioning to barefoot or minimalist running:
I can speak of the former firsthand, since I learned this lesson the hard way. I was one of those lazy runners (and by “lazy runner,” I mean a lazy researcher) who just thought that if I changed my running form to land on my forefoot first, all my pain would magically go away and I'd be able to run injury-free ultramarathons the rest of my life. The result: I landed just on my forefoot without letting my heels touch the ground, hurt my ankle from calf overstrain and was out from running for several weeks.

I asked Sanatan if he had any feedback on how my back leg was moving up behind me as I ran and he assured me we’d be covering that topic in a future lesson, along with addressing how running form changes when you run faster. Can’t wait!

Minimalist Mondays is a free injury-free running workshop that meets weekly in downtown Portland, Oregon. It is taught by Dr. Sanatan Golden and Dr. Ray McClanahan. Everyone is welcome! For more details, including recaps of past lessons, visit the Minimalist Mondays website.