Dropping and Cadence: A Week of Clicking

I’ve been doing it infrequently ever since I moved to Oregon several years ago, but it wasn’t until last summer that I started hitting the waves on a regular basis. It’s become easier to time a wave right and to actually stand up on it, but I still consider myself a beginner. I’m not very competitive by nature and I’m content if I stand up on a wave after it starts to break and just ride it straight in toward the shore, which is about all I usually do in the water. 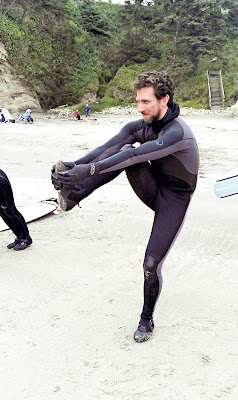 Warming up before getting in the cold Oregon water.
No, I actually can't do that pose for more than 2 seconds.

Last Sunday, my friend Sylvan and I took our boards on a long overdue trip to the coast. It was a pretty mellow day, meaning the waves weren’t anything big or spectacular, but a nice one would roll in from time to time. To my surprise, I dropped in on one of the first waves I went after, meaning that I caught it and stood up right before it broke. I was then able to turn right and ride parallel to the wave, across the wall of it, and stay a little in front of the break. It was a great ride, and it gave me that indescribable feeling of peace and oneness that reminds me why I go surfing in the first place.

Then I did it again on the next wave. And the next. And a whole bunch after that.

Something just clicked. Like I said, I’m not that competitive and I haven’t been pushing myself to improve my surfing, but after a long time of going at it I now got it. It wasn’t a change in logic or strategy, and there was no rational thought of trying a different technique. I was just suddenly able to feel when my speed and position were in the right place to drop my weight on the board and let the wave carry me off. I had a real connection with the wave that I never felt before, and it made me realize that in the past I took a much more logical approach. I stayed in my head and analyzed the physics of timing and position instead of letting myself just feel when it was right. That logic plays its purpose to learn technique and form and get you on the road, but at some point I just needed to let all that go and feel.

And that’s where running comes in, because I learned today that the exact same principle applies to the trails.

I moved recently and have been running without a watch … only because I couldn’t remember which box it was in. I haven’t invested in a fancy Garmin yet (although I’m more than a little tempted), so my watch only serves two basic purposes: time my run and check my cadence.

I confess: keeping up a fast cadence has been a challenge for me. I’ve read from many sources that at least 180 footfalls (or 90 strides) per minute are ideal. Less than that and you’re keeping your feet on the ground longer, which means more sluggish movement, more work to liftoff, heavier foot strikes and less efficient running. The problem is that I’ve always felt it’s a losing battle to keep up the 180 BPM pace. I can do it when I’m timing myself and straining to move my legs as fast as I can, but as soon as I focus on other parts of my running form the pace drops like a dead weight. Even though I know it’s beneficial, a high cadence just felt like so much strenuous work. 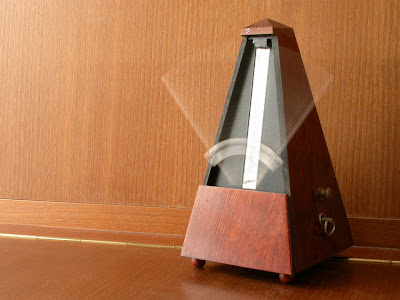 I've been considering listening to music paced at 180 bpm or using a metronome, although both are undesirable (I don’t like running with music because I prefer to be alone with my thoughts, and running with a metronome just doesn't sound fun). Fortunately, the answer came to me another way.

I found my watch today and ran with it on the trail for the first time in weeks. Cadence was on my mind and for the first couple miles I had my usual struggle: work to keep it up only to have it fall when I stopped consciously trying to move my legs as fast as possible. At that time, my surfing experience was still on my mind and I started wondering if I could pull the same trick to let go of the logic and feel the benefits of the cadence without overthinking it. I stopped checking my watch and just ran for a while, zoning out and letting myself feel the difference when I changed the pace of my footfalls. And when I say “feel,” I don’t mean examining my physical sensations of muscle tension or form or speed, but just sensing the general state of rhythm around me. Then it happened: something clicked.

It took some practice, but I managed to let myself fall into this state of light, springy running. I felt like I could make a weight of sluggishness disappear, and I never realized it was there in the first place. After keeping it up for a while, I checked my watch and found I had been running at about 185 bpm naturally, without the strenuous effort. And it felt very similar to the surfing epiphany.

The best way I can describe it is to recall how I felt learning to swing as a kid. My sister explained to me over and over how I needed push and pull on the swing chains, but it didn't matter how much I thought about it or understood what I needed to do; I had to keep doing it over and over until I could just feel the rhythm of pumping back and forth to make the swing move. Call it muscle memory or call it zen. I don’t care, it works.

A lot of runners may read this and think “Duh!” After all, running is very natural and this is something that probably comes naturally to many people, as it probably came naturally to me as a kid. I’m sure it did back in the day, but I forgot it somewhere along the way. It makes me sad to think that it’s a challenge now to simply feel something so basic and innate, and I have to wonder what else I've forgotten to feel over the years.

I blame television. And my old Nintendo.