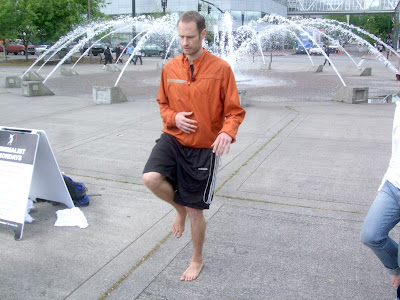 Yesterday was week 3 of my Minimalist Monday running workshop. As promised, we started diving into the mechanics of running... and ran!

It was a beautiful day at the park and I shed the pants and stripped down to my running shorts for the first time this season. Doc Sanatan gave the lesson and focused on two concepts: landing softly and lifting your foot off the ground gently.

To practice taking the pounding out of our landing, Sanatan had the class stand with our bare feet as close together as we felt comfortable. He had us bounce lightly up and down while keeping our feet on the ground, then told us to focus on just moving our knees foward and back. We gradually added more bounce until we were just barely lifting ourselves a centimeter off the pavement, landing on the balls of our feet. As we were all bouncing, he asked us to notice where we felt tension and to work on landing in a way that was soft and painless. Speed wasn't a concern, but it was important that we kept our center of gravity upright and landed with our feet on the same spot. Doing this repeatedly helped us find a comfortable level and frequency of bounciness for a soft landing, which varied from person to person. He called this exercise Soft Tops and recommended doing it for one minute a day, especially right before a run.

Here's his video demonstration, which looks like it was recorded on a much colder day:

Although we were technically lifting our feet off the ground for this next exercise, I think Sanatan would prefer to use the word peeling. He demonstrated the idea with a towel. Holding the towel by one corner, he gradually lay it on the ground from one end to the other, then picked it up moving the opposite way. Once part of the towel touched the ground, it didn't move or slide across the pavement at all. The only movement was up and down. In the same way, we were to practice lifting our feet up and down. First we lifted our heels, leaving the toes and the ball of the foot down, then lifting the ball and leaving the big toe pointing down, then lifting that toe straight up. Going down was the exact opposite: toe, ball, heel. No sliding, no pushing down, no tension in the foot at all. Just let the foot go limp, lift the ankle and let gravity keep the rest hanging.

We did that very slowly while standing in place, lifting the foot until the toe was just above the ground. As soon as one heel touched down, we began lifting the other. When this became comfortable, we started doing it faster. Sanatan then had us find a comfortable balancing point while holding one ankle up against the opposite knee, but still below your butt. We continued the drill by lifting each ankle up to that point and lifting our heels up quickly the instant the other foot touched down. Things to avoid: tipping from side to side, kicking our feet back behind our butts, lifting our knees up too far in front and jumping up and down when switching from foot to foot. This exercise, called Switchies, taught us to get familiar with the feeling of peeling your foot off gently and smoothly. He also recommended it for one minute a day, especially right before a run.


Putting it Into Practice

That was it for the official lesson. It didn't take much time, so Sanatan asked if anyone wanted to join him and Doc Ray for a run. A couple of us tagged along and we ran about three miles around Portland's Waterfront Park, crossing the bridges over the Willamette River. During the run, Sanatan looked at my gait and gave me tips to work the lesson into my stride.

At one point, he stopped and gave me his backpack to wear for the "backpack test." As I ran with it, he asked me to notice how the straps felt on my shoulders. The answer, I'm sorry to say, was that they were bouncing up and down like a jackhammer. He showed me that there were two ways to minimize that bouncing. One was to walk low to the ground with your perfectly head level, like Groucho Marx (not recommended for healthy running posture). The other was to put the Soft Tops and Switchies into practice.

He had me experiment with lifting my feet off the ground sooner, which meant shorter steps and a higher cadence to the point that it was a little uncomfortable. Then he had me do the opposite and let my foot drag far behind me before lifting it up, which was longer steps and lower cadence. The point was to be aware of all the differences these made in my body and to find the sweet spot in the middle that felt smooth and gentle. I didn't get the straps to stop bouncing completely, which is impossible unless you do walk like Groucho, but I did notice I could make a difference in their impact.


The running route, through the park and across the bridge.

I would say the idea of peeling off made the biggest difference. I thought I was already peeling my foot off the ground well. Not so. Sanatan helped me realize I was habitually lifting my whole foot up at once. I started focusing on the Switchie exercise and let my foot bend and hang as my ankle lifted, then brought it forward with the toe pointing down and almost dragging along the ground until it was time to let the foot down again. This brought two noticeable results: the backpack bounced less and my footsteps became MUCH quieter.

I had always heard that if your feet make a lot of noise while you run then it means you're doing it wrong and should adjust your gait to make quieter steps. I've made my steps less noisy over time, but never inaudible. I always thought that was as good as it could get until now. Suddenly, my footsteps became virtually silent. And it didn't happen by focusing just on the landing, but on the liftoff. I don't totally understand the reasons for that, but my guess is that the Switchie peeling method put my foot in a better position to land softly, since my toes were already pointing down before I lowered my foot. When I previously lifted my foot up flat or with the toes up, I had to quickly accelerate the foot down for a forefoot landing, which probably created more impact and more noise.

I know I've said it before, but I feel very privileged to have access to a free running workshop taught by a professional podiatrist and physical therapist. People pay big bucks for training like this. I think the only reason they don't have 500 people lining up to take the free class every week is that the public hasn't caught on to it yet. If you're a runner in the greater Portland area, I strongly recommend checking out the Minimalist Mondays website. They're always happy to have more trainees.

(Fight Club author Chuck Palahniuk lives in this town, so those references are common here.) 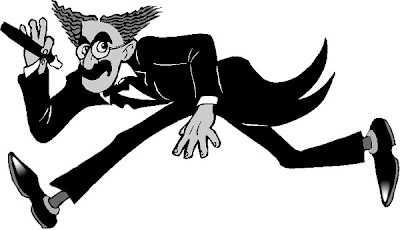 Not a recommended running posture.