A Good Landing Starts with a Good Liftoff 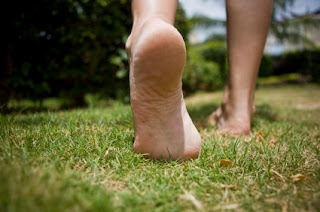 I have a slight correction from my last post, although you won't see it now because I made a revision to avoid giving misleading running tips.

I originally wrote that my footsteps became quieter and softer when I focuses on peeling my foot on the liftoff rather than lifting the whole foot up at once. My theory was that I wasn't lifting my foot as high, which led to less impact force.

After running this by Doc Sanatan, he pointed out that he doesn't recommend keeping feet close to the ground, which will be covered in a later Minimalist Monday lesson. On the contrary, the height that you raise your foot increases with your speed. He suggested instead that my landing was softer because my toes were already pointing down before I began lowering my foot. Here's how he explained it:


"As you ‘leaf’ your feet up off the ground, the height that is efficient for you will increase as your speed does. Your toes, however will be lower than before as the ankle is relaxed. I believe the main reason this improves landing and efficiency is that you are simply leaving the foot in the position it is going to be as you land vs. lifting the whole foot flat or toes more and then having to re-accelerate the forefoot down TOWARD the ground to avoid heel strike. This would cause your contact point to be accelerating towards the ground thus creating more contact force and noise, and requiring more effort in the calves." 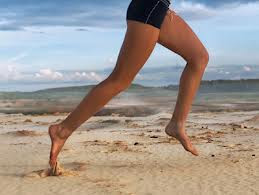 Keep those toes down!

It was interesting to me that he mentioned the connection to the calves because I have a lot of calf tension when I run. As I understand it, that could be a primary reason why I suffered my posterior tibial tendonitis injury last winter. Although that tendon is on the inside of my ankle, it attaches to the calf muscle. When the calf is tight, it pulls that tendon and can strain excessively... especially if, like me, you tried increasing your running distance more quickly than you should have.

I have a lot of knots in my calves, and I've tried foam rollers, the Stick and active isolated stretching with mixed results. They all help to some degree, but the knots are still there and I often feel my calves getting very tight as I run. I'm curious to see if working on a good liftoff will help ease that, though I expect some massaging techniques will still be useful. Rolling on a lacrosse ball will be the next experiment.

I just went for a short 3-mile run to try putting this into practice and so far, so good. The calves were still a little tight, but I also often caught myself habitually lifting my whole foot off at once. It took some focus, but I felt my body was learning the change. Baby steps...